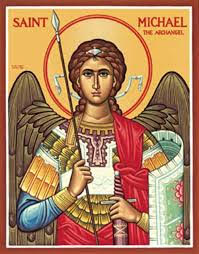 Today we celebrate the presence, rather than the life, of St Michael and All Angels, and what a heavenly host this is! Apart from the three Archangels of the Western Church, Michael, Gabriel and Raphael, one would be hard pressed to estimate the total number of “rank-and-file” angels. These angels are God’s messengers, sometimes speaking on His behalf, and they seem to be a fairly scary bunch, if the reaction of those well-known shepherds is anything to go by.

Michael appears in the Old and New Testaments and in certain of the apocryphal books. He is seen as Protector of Israel (Daniel 12:1), the one who fights against the evil spirit (Daniel 10: 13), champion of the cause of righteousness and as patron of Israel, at least in Old Testament times. In the New Testament, Michael leads God’s forces against all manner of evil, particularly as depicted in today’s reading from Revelation (12: 7 – 12a). In art, Michael is often depicted in appropriate battle dress and it is said that he is patron saint of chivalry, police officers, paramedics, fire fighters and the military: one source quoted him as being also the patron saint of warriors, the sick and the suffering . This all leads me to the idea that Michael is God’s right-hand “man” when it comes to dealing with forces of evil.

Gabriel is well known as the bearer of Very Important Messages from God and is particularly familiar to us through his connections with Mary (Luke 1: 26 – 38) and Zechariah (Luke 1: 11 – 20). In these two encounters, Gabriel, who appears in some form of human guise, is at pains to tell Mary and Zechariah that they need not be afraid and that he brings good news. Raphael appears in the book of Tobit (3: 17) and is said to be able to perform all manner of healing. These three Archangels have been venerated and thus considered “saints”, despite not being of human form, because they are spirits who are close to God.

But what of the other angels – those whom the shepherds feared, who fought with St Michael against evil, who are part of the heavenly choir or members of the harp and trumpet ensembles ( – all of them males, by the way)?

And let us not forget our “guardian angels” who help us out in times of need. I somehow think that today is a day for giving thanks for this last group – the angels who enfold us with love and security and who guide and protect us when needed. I sometimes think of them as policemen on the beat, doing the rounds for God and making sure that all’s well.

“Angels and Archangels and all the company of Heaven” – where would we be without them!

St Michael and All Angels